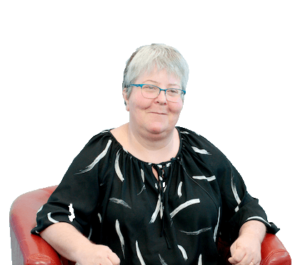 To watch Judy's story, click on the video below.

[Judy is in her mid-forties]

I’m Judy Huett. I live in Burnie with my husband, Peter. I’m a woman with an intellectual disability. I work for the Speak Out Association of Tasmania.

I went to Geneva with a delegation from Australia. I was one of the co-leaders of the delegation. We went and presented at the United Nations Committee for the Rights of Persons with Disabilities.

[Judy is with 3 colleagues. A road lined with the flags of the world. “Universal Declaration of Human Rights” scroll. Delegates at the conference]

I presented on the closure of institutions. It’s a passion… I guess you can say it’s a passion for me to push for the closure of institutions. I’ve had friends that have lived in institutions most of their life and have been either assaulted or victimised, have had their rights taken away. They’ve been put to bed at 6 o’clock at night and got up at 6 o’clock in the morning. They don’t choose to live where they live, they don’t choose to live who they live with. They don’t get to choose their own clothes or choose to eat the food that they’re given. You know, it’s just, “Here you go. You’re going to do this today,” you know. So instead of giving a choice, it is, you know, people are saying that they’re going to do this, so that’s why I think institutions should be closed. I also spoke about sheltered workshops and how people in sheltered workshops don’t get paid an equal wage.

[Judy’s presentation is projected on a large screen]

There were lots of things our delegation was asking for. We had parents with an intellectual disability on the delegation that were asking to have their rights upheld so that they could keep their children and that they wouldn’t be taken away. I think they responded really well and they understood why we were there and why we were pushing for these things to be upheld. But also I think there are some changes that need to be done to better the lives of people with disabilities that are Australian, some things the government needs to do, so…yeah, so that we have a better life and, you know, people, younger people coming on or younger people with disabilities have a better life as well.

[The logo for Women with Disabilities Australia (WWDA)]