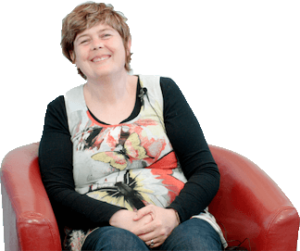 To watch Monique's story, click on the video below.

[Thirty-something Monique sits in an armchair]

[MONIQUE]
Hi, my name’s Monique, I’m from Ulverstone, and I’m married. I love erm… dancing and singing. I love arts and crafts. I’m a leader. I’m very encouraging, supportive, helpful. I love helping people to speak up for their rights and to build their confidence. I never… I never had that when I was young, and I just want them to have the oppur… I don’t want them to miss out on opportunities, like I missed out when I was young. It’s so important to have a mentor. Like, I love mentoring people, especially young people. I’ve mentored…I think about three or four people. But I know that I helped them. I keep in contact with them. I sometimes see their parents, and they say that they’re doing really well. And that makes me feel really good. It’s very rewarding. It makes me feel happy to know that I’ve done a great job. Yeah, I think there’s, yeah, some young people that look up to me, ’cause I’m the president. And that’s great. I helped with an app called Sunny, helping get young girls and women with disabilities to know what to do if they had someone violent in their lives.

[Scrolling though the Sunny app on a mobile phone]

[MONIQUE]
‘Cause there’s lots of violence out there and people don’t know what do to. And I think Sunny’s a really good tool for that. I made friends that were working on it, as well as me, which is really good. When it was all finished, we had a launch, and we went to Canberra and I spoke in front of some parliament people, and it was really good. [Monique speaking at the launch and standing outside Parliament House]

[MONIQUE]
Don’t be afraid and scared to speak up for yourself. And to know your rights and to get help.

[The logo for Women with Disabilities Australia (WWDA)]